Posted on October 7, 2011 by brucewhitehouse

Back in the old days –the late 1990s– I fancied I was different from your average Western expatriate in Mali. As a Peace Corps Volunteer, I was meant to “live at the level of the population,” to borrow a phrase popular in Peace Corps official discourse. Out in my village in southeastern Mali, I indeed slept under a thatch roof, showered from a bucket, used a pit latrine, got around on my bicycle or on public transport, and ate what my village host family cooked for meals. So I rather looked down on those “expats” in the capital, living in their air-conditioned villas, riding in chauffeured SUVs, buying overpriced corn flakes at the Lebanese-owned supermarkets. 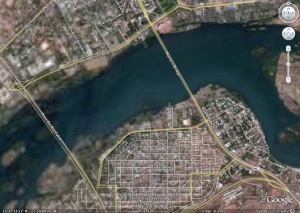 Am I one of them now? As a Fulbright Scholar in Bamako, I don’t exactly live like my compatriots who work as diplomats or aid workers. But I do live pretty well. After arriving here in August 2011, my family and I took about two weeks to find a house that was suitably situated in the Badalabougou neighborhood, close to the Niger River and the university. The place is modest by American standards–three bedrooms, a double parlor, kitchen and two bathrooms. The rent is less than half of our monthly mortgage payment for our house back in Bethlehem, Pennsylvania. 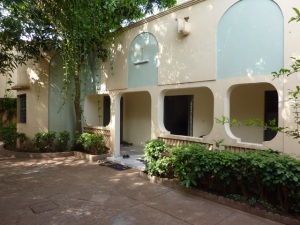 Our house in Badalabougou, Mali

But it still qualifies as un villa in Mali, since it’s made of concrete instead of adobe and thatch. We don’t have to go outdoors to get water or use the facilities. The floors are of ceramic tiles rather than packed earth.

Our dwelling is normally home to six people, two to a bedroom: my wife Oumou and me, our children Rokia and Zachary, my wife’s sister Dourou who studies at the university nearby, and Bah, our baarakela or live-in domestic worker. Most Bamako households that can afford to do so hire a baarakela to help out with cooking, cleaning, laundry, etc. They are usually teenage girls from rural areas with little or no schooling. Bah, who comes from Oumou’s mother’s family, at least finished eighth grade. She arrived in Bamako for the first time just this month. Most baarakelaw get paid the equivalent of US$15-20 per month, plus room and board. When I suggested that we might pay ours a little more than this, my Malian friends warned me not to: If you’re too generous with her, they said, she’ll get lazy and spoiled. To think that 75 cents a day is generous! 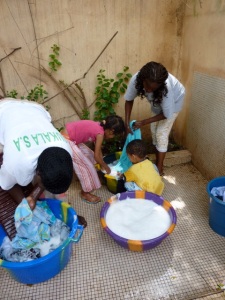 Doing laundry in the courtyard

Setting up house in Bamako has turned out to be a long process. It began with three large purchases, each roughly equivalent to one month’s rent: 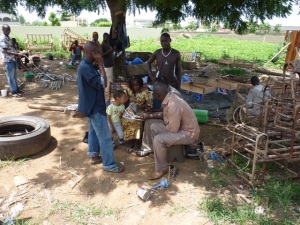 Perusing a product catalog at the furniture workshop 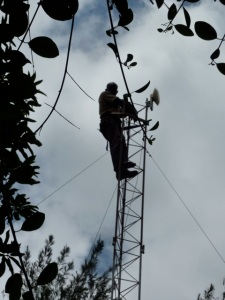 The next step, an important one for me, was getting an internet connection. You can get DSL if you have a landline, or you can get a slower connection via a tiny 3G antenna that plugs into your USB port. We opted for a middle path, getting a wireless antenna installed on our roof that gives us web access that’s decent, but not quite as fast as we’re used to in the States. To load and view a Youtube video, for example, takes at least two to three times as long as the video’s actual duration. Still, it means not having to go to a cybercafe to send and receive e-mails. Rokia can still play her favorite games on PBSkids.org, and I’m using it to post this blog. The service costs about US$65 a month. (That’s three baarakelaw!)

With these steps complete, we turned to smaller acquisitions (kitchen and dining utensils, bedding, and appliances) to add to what we’d brought with us. One big discovery during this stage was a rather new retail business known as “A Thousand and One Wonders,” which may be the closest thing Bamako has to a department store. 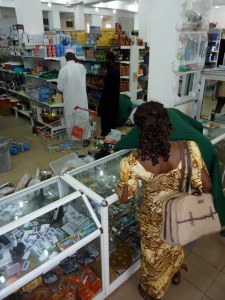 The checkout counter at “One Thousand and One Wonders”

It’s owned by a gentleman from the northern region of Gao who, legend has it, made his fortune selling and servicing soft-serve ice cream machines in Ghana. (Note the ice cream cone featured on his building’s facade, below right.) 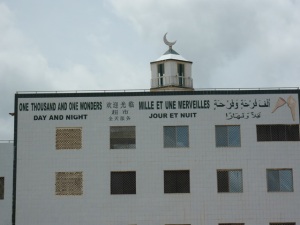 The exterior of “One Thousand and One Wonders,” in Bamako’s ACI 2000 neighborhood

Heretofore, when shopping in Bamako, you’ve generally had to go to a multitude of small businesses to find what you’re looking for. “One Thousand and One Wonders” now offers one-stop shopping for housewares, appliances, and dry goods. Some of the Lebanese supermarkets are going this route too, with expanded housewares and appliance sections.

You may notice this building’s outward resemblance to a mosque. In fact there is a mosque on the premises, and the store closes for each and every daily prayer, as businesses do in Saudi Arabia. This is most unusual in Bamako. The owner clearly has been influenced by Saudi-style Islam in how he dresses and runs his shop. 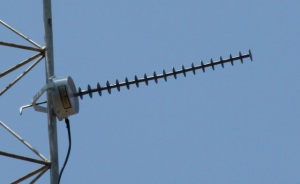 The most recent step in our settling-in has been getting a television. We opted to buy what’s known here as casse (imported used, usually from Europe) rather than new. A 21-inch Philips model cost a little over US$100. For another $20 we purchased a “TV cinq” antenna, and paid a specialist about $4.25 to rig it up properly to our rooftop mast. We now receive three channels: the French satellite channel TV5, the Malian government station ORTM, and a private West African company called Africable. Good for news programs, a variety of telenovelas, and even occasional episodes of American shows like “Army Wives” and “Criminal Minds” dubbed into French. Bah especially likes the telenovelas. But we are trying not to spoil her.

We haven’t yet acquired an air conditioner, as the temperatures have been mostly bearable. But that will change in a few months. By then, I may have completed the transition from “living at the level” to “living like an expat.” What will this transformation mean for my ability to observe and participate in the life of the Bamako residents around me? Will I find myself trapped in the dreaded “expat bubble,” relating primarily to other outsiders like myself?  Of course it helps that I’m married into the local population, that I speak decent Bambara, and have acquired years of life lessons about Malian society. And I still don’t have a car, or even a motorcycle, which means lots of rides in taxis and “Sotrama” minibuses. While I’m on guard against letting myself get too comfortable, I feel I’ve already started down a slippery slope….

This entry was posted in Uncategorized and tagged bamako. Bookmark the permalink.

2 Responses to Settling in Bamako