Posted on May 1, 2012 by brucewhitehouse

8:00 a.m. GMT: I thought I heard more shooting, but it was just thunder. A rainstorm blew in about half an hour ago.

ORTM is broadcasting the same kind of folklore recordings it was playing the morning of March 22, but interrupts them occasionally with a communiqué by the CNRDRE junta, read in French by Lt. Mohamed Issa Ouedraogo. He urges Malians to remain calm. He says that an operation, mounted by Malian and foreign individuals of “various horizons” and backed by  “obscure forces inside Mali” to destabilize the country has been defeated and that the CNRDRE remains in control of the situation. Ouedraogo says the army has killed and captured several men involved in this operation. 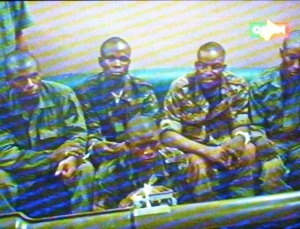 Images show young troops who appear to be prisoners in handcuffs, wearing camouflage fatigues with no insignia; the broadcast also shows images of weapons (assault rifles, hand grenades, a recoilless rifle) that may have been captured. Lt. Ouedraogo finishes the statement, attributing it to Captain Amadou Haya Sanogo, who has not been seen on television since the unrest began yesterday.

Next, wearing a blue boubou and white cap, appears Dr. Adama Traoré, Vice President of the Coordination des Organisations Patriotiques du Mali (COPAM), a pro-putsch umbrella group formed in the days after last month’s coup d’etat. Flanked by a couple of young men in street clothes, he gives a statement in Bamanan with the same content as Lt. Ouedraogo’s remarks.

An SMS comes from the US Embassy: “Situation remains uncertain. Road blocks reported around Bamako. U.S. citizens advised to remain sheltered in place.”

9:00 a.m. GMT: The rain has subsided, not enough to wash the dust off the bottom-most leaves on the mango trees. So far there’s no information from any sources to contradict the CNRDRE claims of control, though one rumor claims that the junta has been broadcasting its televised message via an ORTM mobile unit and is not actually in control of the ORTM studio. I haven’t yet ventured out to assess the situation in my neighborhood, but everything seems calm. Al Jazeera English is backing up the junta’s position that a “counter-coup” has been successfully repulsed.

10:00 a.m. GMT: Just heard two simultaneous bursts of heavy machine gun fire, coming from two directions — north, near the Pont des Martyrs, and south, near the Pont Fahd. Sporadic bursts of rifle and machine gun fire continue emanating from the north. Not sure if it’s celebratory or actual fighting, but it doesn’t sound like the shooting we heard after the coup in March, which was all firing in the air. There’s a rumor in our neighborhood that foreign troops have been sighted in the city and that the shooting is by Malian forces engaging with these foreigners. I’m highly skeptical of these rumors.

One big question is on my mind: Assuming the junta is back in control, what will last night’s attempted counter-coup mean for Mali’s political transition? During his phone call broadcast on Radio Kayira several hours ago, Captain Sanogo claimed that the country’s interim president, prime minister, cabinet and legislature were all safe and would continue to go about their work. I’m guessing, however, that in light of recent events, many troops loyal to Sanogo will have a serious bone to pick with interim President Dioncounda Traoré, on whom they will likely blame the recent instability and whom they have already accused of selling out the country to ECOWAS for selfish political gain. Rumors are circulating online that ECOWAS troops have entered Mali from the south, via the Sikasso region, and are heading toward Bamako.

Foreign mediation of Mali’s crisis appears to be dead in the water at this point, as anti-foreign rhetoric has ratcheted up. Sanogo alleged on Radio Kayira that foreign mercenaries were involved in the unrest, and warned Malians to be on the lookout for unknown foreigners. I presume by this he means those who might be part of an ECOWAS intervention force. It’s hard to see how the junta and ECOWAS can get back to the negotiating table now, given how much positions on both sides have radicalized.

Unnamed sources cited by Jeune Afrique indicate that interim president Traoré and prime minister Diarra are safe, and apparently not in military custody.

12:00 GMT: More bursts of gunfire audible from the northeast. Since they are few and far between, I’m going to assume that they are from shooting into the air rather than shots fired in anger. RFI is reporting red berets firing in the air in and around Djicoroni. But I’m still staying home today.

Radio Kayira continues to rebroadcast Captain Sanogo’s telephone call from 12 hours ago on its airwaves. I’m unaware of any further contact with the captain since then and he has not yet appeared on television.

12:45 GMT: More shooting coming from the same direction, including the “boom-boom-boom” of heavy weapons. I’m wondering if I should revisit my hypothesis of shooting into the air. But so far media are still reporting that the fighting in Bamako and Kati is over, and that forces loyal to the CNRDRE junta won.

13:30 GMT: Jeune Afrique reports that junta troops have attacked the Djicoroni base that is home to the airborne regiment and presidential guard. A friend speaking on the phone with relatives in Djicoroni could hear the sound of heavy gunfire.

ORTM television continues to air documentary programs, nothing at all about current events, and the ORTM’s two radio frequencies have also been broadcasting identical pre-recorded content. It seems that ORTM staff are not present in the studios, or at least not in sufficient numbers to produce and air live programs.

15:00 GMT: I phone a friend who works in ACI 2000, not far from Djicoroni. He says soldiers have been passing through the neighborhood on their way to attack the paratroopers’ base, and I can hear gunshots on the other end of the phone. There are still sporadic bursts of fire audible from my house in Badalabougou, still emanating from the northeast.

AFP, citing hospital sources in Bamako, says the casualties so far include 14 dead and 40 wounded among military personnel on both sides.

16:00 GMT: Captain Sanogo appears on ORTM television, shown with fellow junta officers in a salon. He describes the current conflict as having been set in motion by “ill-intentioned elements” that had been infiltrating Bamako in recent days. He continues to express his support for the “accord-cadre” signed with ECOWAS a month ago. Sanogo’s brief (2 min. 30 sec.) appearance is followed by a statement by Hamadoun Touré, minister of communication in the new civilian government. Touré urges Malians to remain calm and to strive for a definitive return of constitutional rule as well as a restoration of the Malian state on all Malian territory (including the north).

I continue to hear sporadic shots from the northeast. Reuters reports that the Djicoroni Para base has been overrun by troops loyal to the junta, and that many red berets fled.

22:00 GMT: All quiet, no shots audible for some hours now. It seems the junta troops have reestablished control. I’d heard that soldiers had taken over the city’s two principal bridges over the Niger, but a friend who crossed the Pont Fahd four hours ago told me he saw no soldiers on or near it.

The airport is closed and all commercial flights in and out have been cancelled until 7 May. Royal Air Maroc has suspended all flights to Bamako for the next two weeks.

One of the two students wounded during yesterday’s police raid at the university campus reportedly died in hospital today, bringing the death toll of that operation to two. Something tells me my anthropology class won’t be meeting this week.

Still nothing but canned programming on ORTM radio and TV, and no journal télévisé tonight. I’m also disappointed with Africable, which after airing some preliminary reports of unrest yesterday stopped covering the situation in Bamako altogether, and has since only aired news from other West African countries. The private network did the same thing after the March coup, broadcasting an early interview with Captain Sanogo before suspending local journalism for several days. Junta’s orders, perhaps? The Bamako newspapers were all mum today too, though it could simply be because of the holiday.

The U.S. Embassy in Bamako has announced that it will be closed tomorrow due to “continued unrest.” I am hoping, however, that schools will reopen, as I am very much in favor of letting my children go bug somebody else for a few hours. If the calm persists, I think we have a good chance of that happening. Otherwise, I will be desperate to avoid another day of sheltering in place.

23:00 GMT: For what it’s worth, today has seen by far the most visits to this blog of any day since I started it in September: about 6,000 hits since midnight GMT, twice as many as the previous highest-traffic day (which was April 4, the day I wrote that Peace Corps was pulling its volunteers out). People seem to like it when I blog about bad news or the sound of gunfire. I can’t exactly promise to keep that stuff coming, however. In fact I can’t wait to get back to blogging about mundane bamakois life — higher education, gender relations, the Djakarta, the local martial arts scene…. For months I’ve been knocking around an idea for a post on the dojos of Bamako. But in light of Mali’s recent political trauma, the thought of writing about such things seems in poor taste. I’ll get to them someday, when all this is over and Bamako is again a rather dull place to be.

Here’s wishing you had a happy May Day/International Workers’ Day/Organization of African Unity Day.

23:42 GMT: Damned if there isn’t more shooting breaking out north of the river. But I’m going to bed anyhow.

64 Responses to Strange days in Bamako