I didn’t teach class yesterday. Normally I give a two-hour lecture on Friday afternoons, the sole weekly meeting of my “Anthropology and Development” course at Bamako’s Université des Lettres et des Sciences Humaines (ULSH). Then again, there’s been absolutely nothing “normal” about this school year where public higher education in Mali is concerned.

I arrived in Bamako last August to begin the school year, and classes should have started up in October. Unfortunately, things were held up by a drawn-out administrative restructuring process that saw the former Université de Bamako split into four newly autonomous entities. First we heard that the resumption of classes would be delayed until November, then December, then January. Even after the rentrée universitaire was finally announced on January 15, I had to wait another month before I could teach my own course. On the first scheduled Friday of classes, none of the morning instructors showed up, so the fourth-year sociology students (who attend classes all day Friday and Saturday) went home at midday. The next Friday, classes were cancelled due to an angry protest in Bamako of the government’s mishandling of the rebellion. The Friday after that was a religious holiday.

On February 17, more than halfway through my 10-month stint here, I got to teach at long last. Since there are not enough large classrooms at the ULSH, we meet in the amphitheater of the Ecole Normale Supériure in the Quartier du Fleuve. Officially there are over 400 students enrolled in my class, and the amphitheater at ENSup is probably big enough for that many, but I don’t think we’ve had more than 250 students in the room at any one time. 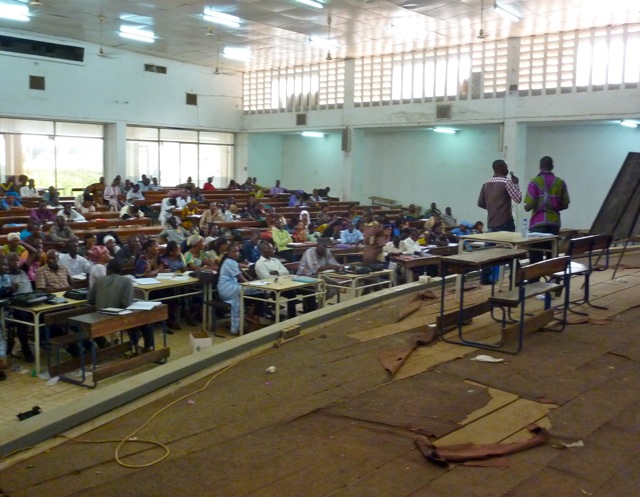 The amphithéâtre Kani Dembélé at the École Normale Supérieure

Since that first day twelve weeks ago, class has met for six Fridays, and has not met for another six. Reasons for not meeting have been entirely beyond my control, and have included the March 22 coup d’état, a blackout, midterm exams, and most recently the violence of the April 30 “counter-coup” and its aftermath. A week ago the government declared that all schools in Bamako, from the primary to the university level, would remain closed to head off potential unrest, and we just heard this evening that they will reopen this Monday, May 14.

The worry now is that classes have been delayed too long for course work and exams to be completed, and that the government will have to declare another année blanche — a d0-over, meaning students will have to start the school year over again in October. There have been several années blanches in recent years.

The university system here faces a host of challenges. One is the lack of resources: there are over 100,000 students in the various branches that used to comprise the University of Bamako, but fewer than 1000 faculty members and nowhere near enough classrooms. With such outsized classes, the only way to evaluate students is through exams, and with hundreds to grade for each class, and no assistants to help, instructors often give one final exam in which students must synthesize what they learned from the entire course into a few hundred words.

Forget about PowerPoint or showing films to your students: instructors are limited to a blackboard, chalk, and if they’re lucky a microphone that works. Forget about computer labs and printers: students must usually rely on private cybercafes. Forget about bookstores: even if the books were here, hardly anyone could afford to buy them. Oh, and one other thing you can forget about: the University of Bamako has been without a working library since its establishment in 1996. In a way, pedagogy here works like it did in Europe before the advent of the printing press: the instructor lectures, students take notes, then memorize those notes to reproduce on the exam. (Luckily we can assign short readings for students to photocopy on their own dime, so it’s a strange pre-Gutenberg, post-Xerox age we’re teaching in.)

In light of all the things the public university in Mali lacks, I’m not sure we even can consider it a university at all. Professors teach there, and students attend classes, but not enough learning takes place. Some of my colleagues tell me they don’t expect more than 10 percent of students to understand what’s being taught. Part of the problem is that public schools at the primary and secondary level have been so dysfunctional in recent years that even those lucky enough to pass their baccalaureate exams at the end of 12th grade — a tiny fraction of all students who begin primary school — often arrive at university without the basic skills necessary to succeed.

On top of under-resourced professors and under-prepared students, you have the problem of a highly politicized student union (the Association des Élèves et Étudiants du Mali, or AEEM) and a somewhat less politicized, but still very militant, faculty union (the Syndicat National de l’Enseignement Supérieur or SYNESUP). Both are highly prone to calling strikes, and if there’s been one bit of good luck this school year, it’s that there haven’t been strikes at my university. But without the AEEM’s active role in Bamako’s current political crisis, it’s unlikely that schools would have been shut down for the past week. When its members aren’t busy getting their skulls cracked by police, the AEEM occasionally mobilizes its own thugs to terrorize students and even university staff.

Then you have the problem of systemic corruption, which spans the entire system, from instructors selling passing grades to students, to administrators over-invoicing their purchases. A branch of the university system recently purchased Toyota Prado Landcruisers for 55 million CFA francs each (US$110,000!), well over their market value. I wonder how anyone could justify such a purchase as an appropriate use of scarce public resources in a context where students don’t have books to read.

Politics, higher education, and plots are increasingly interwoven in Bamako. Of course there’s the AEEM, which has taken a stand against Mali’s ruling CNRDRE junta and whose leaders are often suspected of being manipulated by shadowy politicians. Then, as I mentioned in my previous post, a rector of one of Bamako’s newly autonomous universities was arrested earlier this month and remains in detention. One recent article in the Malian press claims he is suspected of having weapons. I can’t say I know the man well, and I’ve never discussed politics with him. But I just can’t believe that he’s been hiding a weapons cache any more than I’d believe my own department chair at Lehigh was an Al Qaeda sleeper agent (hi Judy!).

It’s tempting to think that the challenges described above are merely growing pains that will abate as Mali’s public higher education system matures. Given how entrenched many of these problems are, however, I think it’s more realistic to expect more strikes, more années blanches, and more unrest to come. Unless Mali’s new government decides to make a serious investment in its universities, the long decline of these institutions will continue. This won’t bother the Malian elite, who can afford to send their children to private universities here or abroad. But it will be a tragedy for the majority of Malians who, despite their lack of means, hope to send their children to university someday.

Postscript, 18 March 2013: Professor Isaie Dougnon, an anthropologist affiliated with the same department for which I taught while in Bamako, has published a scathing critique of Mali’s higher education system on the website University World News.

Postscript 2, 5 May 2013: Read this article by a Malian journalist about the various rackets to which Bamako university students are subjected, most notably by the AEEM and its system of “mafia practices.”

Postscript 3, 25 August 2013: The French website Rue89 has published a scathing investigation of conditions at the various University of Bamako campuses, detailing under-resourced departments, the sale of grades and degrees, and widespread fraud.

This entry was posted in Uncategorized and tagged bamako, cnrdre, corruption, education. Bookmark the permalink.

11 Responses to On teaching, and not teaching, in Bamako