To shoot or not to shoot: The perils of street photography in Bamako

Posted on August 15, 2012 by brucewhitehouse

A recent post on the New York Times “Lens” blog reminded me of a constant problem I encountered in Bamako: lots of people didn’t want to be in my photographs.

I don’t mean they wouldn’t pose for portraits; people who knew me were glad to do so, and often requested it of me. I’m talking about strangers on the street, or in other public places, who objected to my taking a picture that might show them, even in passing.

In the U.S., most of us have some minimal expectation of privacy

when we’re in private spaces–homes in particular, and businesses to a lesser degree. If somebody wants to take a photo of you in such a space, they ought to ask you first. The same rule applies in Bamako. For instance, after ducking into a market stall in Magnambougou to watch young men beating starch into bazin cloth, I asked if I could shoot them, and they agreed (see right).

In public spaces, however, that expectation vanishes. When you’re walking down the street, driving in traffic, or eating an ice cream cone at a sporting event, anyone can snap your picture, for any reason.

But for many Bamakois, the expectation of privacy extends into public spaces. I can’t count how many times I’ve been verbally challenged by some passer-by after pointing my camera at a monument, building or street scene. “Don’t photograph me!” they shout, as if my sole purpose for being there is getting a candid shot of them.

On one such occasion a young fellow actually crossed the street to confront me after spotting me pointing my camera in his general direction. I’d been using my Lumix’s video function to get some traffic footage I might be able to edit into a video about the city. The young man was an ambulant vendor working a busy intersection, and he was concerned that he might have figured in some of my images. “Who told you you could photograph here?” he asked brusquely, before summoning half a dozen of his vendor colleagues to join him. The fact that I spoke to him in Bamanan did not help calm him down. At his insistence, I showed him the footage I’d just taken of taxis, private vehicles and minibuses plying the street, and he managed to find a half-second of the 30-second video in which part of his body was visible between passing cars. He demanded that I delete the video, and I obliged. “You’re lucky I’m a reasonable guy,” he told me; “Most other people would have taken your camera and smashed it on the pavement.”

I’d have gone to the cops in that case, I said. “They’d just tell you that you were in the wrong,” he responded, and his friends nodded in agreement. I’m pretty sure they’re mistaken, but in Bamako it doesn’t matter so much what the law actually says.

Okay, even if I did take your photograph, I asked, what’s the problem with that? “You’d take my picture to your country and show it to people,” he said.

Well yes, I thought, that’s rather the point of photography, and after offering an apology (which he did not accept) I went on my way, assuming that my interlocutor was just being a douche-bag. And he probably was. But later it dawned on me: sutura.

Malian kids LOVE to be photographed

Sutura is a Bamanan-language verb that’s hard to translate. It appears in a common spoken blessing, “Allah k’an sutura” (May God sutura us). It has to do with maintaining dignity by preserving secrets. Being a street vendor is a low-status occupation, and this vendor perceived being photographed, however inadvertently, while on the job as a violation of his right to sutura. Since a photograph could conceivably compromise his dignity, the onus was on me, the photographer, to ensure that he didn’t appear in my images. Sutura may be the antithesis of the Facebook-era ethos of transparency, but it’s still a widespread expectation in Mali. [Sutura also means “to help [someone] out” in the Ivoirian hybrid Nouchi language.]

See that guy shaking his finger at you?

A few weeks later I was on the King Fahd Bridge and saw some fishermen in their narrow canoes, called pirogues, in the Niger River down below. I got out my Lumix and shot. It was only later, when I reviewed the images on my computer at home, that I could see one of the fishermen shaking his finger at me. “Don’t take my picture,” he was signaling. Even in that very public setting, he was concerned about preserving his privacy.

As you can see, I don’t feel always obligated to honor people’s desire for sutura. In this case, you can’t make out the guy’s face anyhow. But after several such encounters I began to wonder: How do other people shoot images in Bamako’s public spaces?

I asked three professionals about this — an American photographer (female), an American videographer (male), and a videographer from Burkina Faso (male), all of whom had worked extensively in Bamako. And they all had the same approach: Whatever objections someone may have to being photographed or filmed in a public place, just ignore them, as politely as possible. Find a new angle and carry on.

That’s an option. As an anthropologist I should be sensitive to the concerns of the people I study. But I also can’t accept the burden, before shooting in a market or on a street, of asking permission from anyone who might wander into the frame; that would render public photography impossible.

There are, of course, certain things at which you should never point your camera in Bamako. Any government building, any person in uniform, and any embassy (especially the U.S. Embassy!) is off-limits. In January, one of my Lehigh students learned this the hard way after taking some pictures of the lovely landscaping outside the U.S. Embassy. But that’s nothing specific to Mali, it’s true in many places.

The post on the Lens blog suggests that taking pictures in public places has been getting more difficult in the U.S. lately. It’s still lawful to do so, but you’re more likely to get a hard time these days photographing certain people, especially police and security guards. But most normal Americans don’t expect to have privacy when they go out in public. 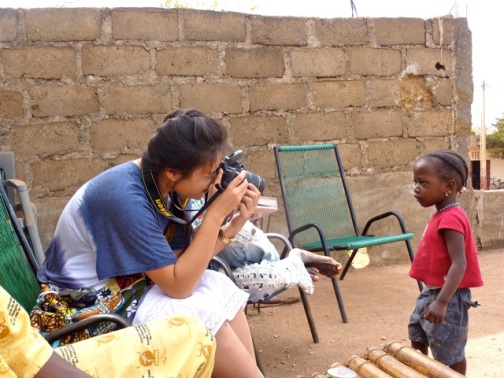 A Lehigh student and a neighborhood child in Bamako, January 2012

In Mali, it’s often been the case that the person with the camera is a (white) foreigner, while the person being photographed is a (black) local. But that’s changing along with technology. One day while walking through the Badalabougou market, I noticed a kid of perhaps 14 walking in my direction, holding his cell phone in front of him and staring at it intently. As he drew near, holding up his phone right in front of me, I heard a telltale artificial shutter-click sound. I’d just been photographed, and without my permission. That’s okay, I thought. Turnabout is fair play.

This entry was posted in Uncategorized and tagged bamako, photography. Bookmark the permalink.

50 Responses to To shoot or not to shoot: The perils of street photography in Bamako