Barbarians at the gates

Posted on January 8, 2013 by brucewhitehouse

Mali has been swirling with rumors of an Islamist offensive since Sunday 6 January, when panicked posts on Facebook reported dozens of pickups full of heavily armed militants advancing on the town of Mopti, and contended that nearby Sévaré (home of the Malian army’s forward HQ) was being “quietly encircled” and infiltrated. The next day a Malian newspaper claimed that Islamists were also threatening the towns of Koro, Diabaly and Nara. Let’s recall that similar panics have occurred in Mopti before and proved to be unwarranted. This much is sure: Islamist forces are reinforcing at least some of their positions over a front line stretching nearly 500 km, from the Mauritanian border to the border with Burkina. 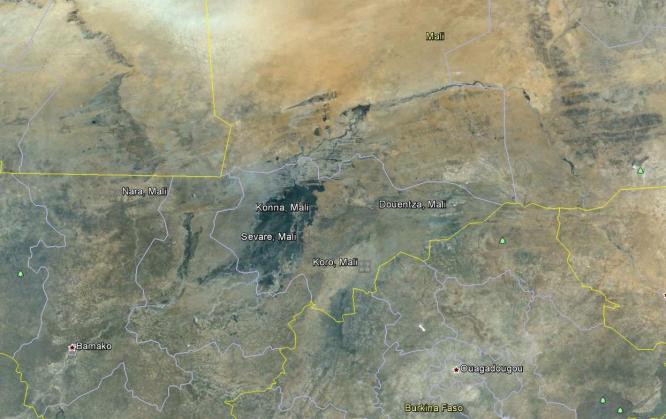 Some limited skirmishes also have taken place. Various international news outlets have reported that the Malian army from its outpost in Konna (60 km from Mopti) fired artillery toward rebel positions (described as “warning shots”) near a village called Gnimignama, 30 km away. (For folks in broadcast journalism, please note that latter name is pronounced “Nyee-mee-nya-ma.”) Today Malijet reported that the Malian army has launched a counter-offensive toward the town of Douentza, and Al Jazeera claimed that rebels captured a dozen Malian troops near Konna. Neither of these last two accounts has been confirmed as of Tuesday afternoon, and the Defense Ministry in Bamako has issued a communique denying that any of its forces were captured.

In light of these developments, I want to reflect on what these Islamists represent to the West, and how we Westerners talk about them. Mali has garnered considerable attention from the U.S. media lately, particularly regarding the application of harsh “Sharia” punishments in the Islamist-controlled north. And it seems like the only adjective we can think of to describe these punishments is “barbaric.” In the course of her 35-minute interview with The New York Times‘ Adam Nossiter about the situation in Mali, broadcast on 3 January, “Fresh Air” host Terry Gross used the word “barbaric” six times, according to NPR’s transcript. (It was seven times if you include the show’s lead-in, which wasn’t transcribed.) Nossiter had recently written about these punishments, although he did not use the term “barbaric” either in that article or during his “Fresh Air” interview.

Stoning and amputation as forms of punishment have been condemned around the world, and the vast majority of Malians (including their most prominent Islamic leaders) are opposed to such brutal measures. But I have to sound a note of caution regarding the preeminence of this term “barbaric” in recent journalism about Mali (a Google search for the terms “Mali” and “barbaric” yields nearly 360,000 results), given the adjective’s long and problematic history. The English word “Barbarian” goes back to ancient Greece, where its root signified the opposite of a citizen. Romans and later Arabs adopted the term to designate anyone outside the limits of their respective empires. In fact, this is how the Berbers of North Africa got their name (though they prefer to call themselves Amazigh). Fast-forward two millennia and we’re still using “barbaric” to describe people in that part of the world — many of whom happen to be Berbers.

The trouble with this adjective is that it precludes analysis. Once you label something as barbaric, you make it clear that you require no further understanding or context on the matter. Yet confronting the application in northern Mali of what are known in Arabic as hudud punishments demands both. The close association between these punishments and the word “barbaric” raises the question of why other brutal acts — such as the killing of 15 unarmed preachers by Malian troops, or the routine practice of lynching suspected thieves in Bamako — don’t generate similar international attention and outrage. Could it be because they’re not perpetrated in the name of Islam? (Given a choice between facing accusations of theft in government-held Bamako or in Islamist-held Gao, I’d take Gao, thank you very much.)

And the “barbarian” blade cuts both ways. Canadian diplomat Robert Fowler, shortly after being kidnapped by Al Qaeda in the Islamic Maghreb in December 2008, was subjected to jihadist propaganda videos (shown on a laptop computer perched atop a stack of spare tires at a remote desert camp). For Fowler and fellow captive Louis Guay, the worst part of viewing them was not their footage of the 9/11 attacks, or of US troops being shot and blown up in Iraq and Afghanistan. In fact, Fowler writes in his 2011 memoir A Season in Hell,

the scenes that elicited the strongest emotion were the all too familiar images of the black-hooded, orange-clad figures, chained hand and foot, shuffling around those tiny cages in Guantanamo…. [This] was the intimate and almost palpable proof of our side’s methodically applied, officially sanctioned, and so casually administered barbarity, parsed into the bureaucratic banalities and legal niceties of officially sanctioned abuse and torture, that was hard to absorb. (pp. 56-67)

Later, his Al Qaeda captors challenged his notions of justice: “How, they would ask, over and over again, could we find the reasonable application of the Shari’a-sanctioned punishment (stonings and amputations) so barbaric compared to the atrocities and indignities that occurred in bloated Western prisons?” (p. 156). [The above underlining is mine.]

Notably, these are the only two occurrences in Fowler’s 360-page text of any word in the “barbaric” family. Yet nobody who’s read the book can accuse Fowler of having latent sympathies for his kidnappers, or of being “soft on Islam.” (His selected bibliography includes works by Nonie Darwish and Robert Spencer, both of whom I place in the category of frothing-at-the-mouth Islamophobes.) What his account shows is that the perceived barbarity of the West is a primary motivating factor among hardcore Islamists today. Let’s keep that in mind as we contemplate the next chapter in what used to be called the “global war on terror.” (In today’s Globe and Mail, Fowler himself advocates Canadian participation in a military intervention in Mali; Prime Minister Stephen Harper is having none of it. Meanwhile, African Union chairman Boni Yayi is calling for NATO intervention; NATO says such an operation is not on its agenda.)

As an anthropologist, I’m guided by a professional stance of cultural relativism — the principle that we must seek to understand another culture on its own terms, not our own.  When it comes to taking a moral or ethical position on a question, I can do that on my own time, but my job is to inform and explain, not to pass judgment. I’m starting to wonder whether the same applies to many journalists covering Mali these days.

Postscript, June 2017: More than four years on, frenzies over jihadis’ allegedly “barbaric” punishments exacted in Mali continue to surface in the Western media. See this excellent analysis of “The Stoning that Didn’t Happen” by three specialists.

This entry was posted in Uncategorized and tagged Islamism. Bookmark the permalink.

15 Responses to Barbarians at the gates