Posted on January 23, 2013 by brucewhitehouse

After several days of contradictory reports, it’s now certain that the armed Islamist fighters who had taken over the town of Diabaly, in Mali’s central region of Segou, have departed. Events in Diabaly over the last two weeks offer useful clues about the abilities and qualities of the three armed forces involved — Islamist, Malian government, and French. 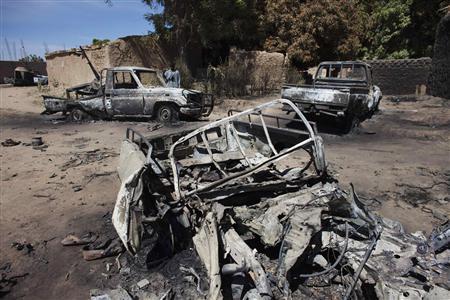 Charred pickup trucks destroyed by French airstrikes are seen in Diabaly, Mali, January 21, 2013. The town of Diabaly was retaken by French and Malian forces after al Qaeda-linked rebels took over the town a week ago. (REUTERS-Joe Penney)

This small town, population approximately 15,000, is located on the vast plain north of the Niger River, amid rice fields and irrigation canals dug during the French colonial era. Before dawn on January 14, as reported by Alan Boswell of McClatchy Newspapers, a column of several dozen Islamist vehicles moved toward Diabaly, entering not by the northern main road where Malian troops were waiting, but from the south, flanking the town and catching its defenders by surprise.

The Malian army collapsed quickly, some of its soldiers taking off their uniforms and running once the battle began. Their poor performance, in Diabaly as in Konna a few days prior, has cost the armed forces the confidence of the Malian people, according to a report from the Los Angeles Times. Footage from France24 taken in the nearby town of Niono shows an army of exceedingly modest means, unable to feed itself and unprepared for the fierce determination of the Islamists.

Once the army was defeated, as many as 120 Islamist pickup trucks (the AP reports 30-40) occupied Diabaly, where they were parked under mango trees to conceal them from French aircraft. Under the command of an Algerian Arab known as Abou Zeid, the Islamist fighters occupied private homes, sometimes setting up gun emplacements on the roofs. Their ranks included some English-speaking Africans as well as others who “looked like Europeans,” according to witness accounts. They took no prisoners, executing the Malian soldiers left behind. Although some civilians were executed, in general the Islamists did not deal harshly with civilians, even seeking to win them over according to the Wall Street Journal. They even offered to pay rent to the owners of the homes they occupied. (The “hearts and minds” campaign carried out by these groups in northern Mali has been documented by Al Jazeera.) While they did try to keep women from going outside with their heads uncovered, they did not immediately attempt to impose the harsh interpretation of Islamic law that they had instituted in northern towns, where they had enacted it over a period of several weeks.

Islamist fighters laid mines outside homes in Diabaly, according to the WSJ and The Independent. They also vandalized the Sacre Coeur Catholic church, breaking the crucifix (see video from francetv) and beating up Christians. Note that, as elsewhere in Mali, Muslims in Diabaly always got along well with members of the town’s small Christian community in the past. These abuses were committed by outsiders, not town residents.

“I am angry at them. I studied Islam — so I know everything they know. Not one of the rebels came to my home or to the mosque to see me,” Diabaly’s chief imam told NPR’s Orfiebea Quist-Arcton. “If they were true Muslims, they should have looked for me, because I am the religious leader here.”

The French seem to have acquitted themselves rather well in their effort to drive the Islamists out of Diabaly. Over a week, they targeted enemy vehicles from the air, ultimately forcing the occupiers to flee the town on foot. Some reports suggest they headed east; most of them seem to have melted away. The town’s civilian population was apparently spared: the only report of civilian casualties I have seen so far is of one child wounded by French shrapnel, reported by the BBC. The people of Diabaly, by all accounts, welcomed the Islamists’ departure.

“The only thing that prevented the French planes from annihilating these people is that they were hiding in our homes. The French did everything to avoid civilian casualties,” a resident told Rukmini Callimachi of the Associated Press. “That’s why it took so long to liberate Diabaly.”

Yet the Malian army has warned of difficulties caused by enemy sympathizers. “The war against the Islamists is not at all easy and there’s a very small part of the population which is helping their cause,” Col. Seydou Sogoba, the Malian commander in the Niono, told the Associated Press. “That is what is making the fight against them tough.”

What does all this augur for the next phase of Mali’s armed conflict? The Islamists easily overpowered their Malian army adversaries, who were not expecting the enemy to be so heavily armed. Some commentators think the Islamists’ cunning has been exaggerated: David Blair of the Daily Telegraph, for instance, casts doubt on the Islamists’ strategic thinking, arguing that they made a terrible mistake by trying to push into southern Mali earlier this month. But Andy Morgan contends they’ve still got plenty up their sleeve, and will be much harder to fight in the desert, their home turf.

Perhaps the most pressing concern for the Malian military pertains to human rights violations. Members of Mali’s security forces have allegedly committed atrocities against Tuareg and Arab civilians elsewhere (see also a report from The Guardian). France2 television reported on 22 January that 10 to 20 suspected Islamists had been executed by Malian soldiers near the town of Mopti, their bodies dumped in a well. The FIDH claims army troops have engaged in a pattern of abuses against civilians in the Segou and Mopti regions.

Screencap of 22 Jan. news broadcast on France2, showing a bloodstained well in the town of Sévaré where the bodies of civilians executed by Malian security forces were allegedly buried

The Malian army’s Chief of Staff Gen. Ibrahima Dahirou, in an interview with RFI, denied his troops had committed any wrongdoing and said their training had stressed protecting the rights of civilians. Yet such allegations appear to have touched a nerve. Mali’s prime minister’s office today felt compelled to issue a communique: “The government reiterates the instructions given by the Interim President of the Republic to the security forces regarding strict respect for human rights. The army must be above reproach and there can be no question of us tolerating acts we decry from the terrorists,” it read in part. The entire statement was read on state TV’s evening news on 23 January, followed by a statement from the army chief of staff emphasizing his forces’ commitment to protecting civilians and “scrupulously respecting” all relevant human rights conventions.

Malian troops are not only the weakest link in the French-led military campaign, they may prove to be its greatest liability. Their lack of discipline and apparent willingness to carry out harsh “reprisals” against unarmed civilians will surely complicate the Malian government’s efforts to win back the territory it lost last year. Various civilian militias formed by the Malian government have a history of targeting Tuareg and Arab civilians. In the weeks and months to come, French military commanders may find that they must protect the people of northern Mali not only against Islamists, who are all too willing to use them as human shields, but against members of Mali’s own armed forces.

13 Responses to Lessons from Diabaly