Sanogo in the clink

Posted on November 27, 2013 by brucewhitehouse

I’ve been waiting for just the right reason to bring this blog back from hiatus, and that reason seems finally to have arrived.

According to the AFP, “Amadou Sanogo, leader of a 2012 coup that plunged Mali into chaos, was jailed on suspicion of murder and complicity to murder on Wednesday.” Mali’s chief prosecutor Daniel Tessogué has told the Associated Press that Sanogo has so far been charged with kidnapping only. Sanogo, according to his own spokesman, was forcibly removed from his home this morning and brought before a juge d’instruction (judge of inquiry, responsible for leading an investigation preceding a criminal case). This hearing reportedly took place at the gendarmerie in Faladié. A source within the Malian Ministry of Justice says that this action emanated “from the highest levels of the state.”

Today’s arrest puts an end to the month-long standoff between the former captain (and, since August, current four-star general) and Malian judicial authorities. This stalemate began in late October amid reports of Sanogo’s arrest. Here’s a recap of how it evolved over the past several weeks: 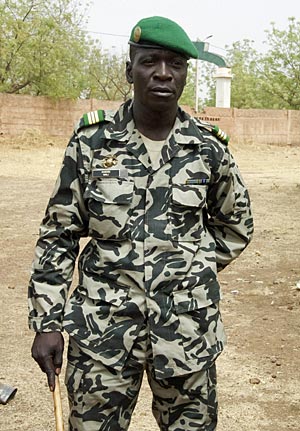 How the mighty have fallen

Many other recent developments in Bamako suggest that the government of President Ibrahim Boubacar Keita (“IBK”) has been gradually stripping the Kati junta of whatever power it still exercised. In early October Sanogo had to move out of his Kati fief and take up residence in Bamako, an attempt by civilian authorities to undermine Sanogo’s influence. This came on the heels of President Keita’s scrapping of Sanogo’s military reform committee. On 9 November, the Malian army chief of staff, Gen. Dahirou Dembélé was sacked; Dembélé had been appointed to his post by the junta in April 2012. On 11 November, former red beret commander and ATT ally Col. Abidine Guindo was released from prison; Guindo was widely believed to have led the 2012 “counter-coup” and had been seen as the junta’s chief adversary within the military.

Wonder if they let him keep his magic baton…

With Sanogo’s arrest this morning, these events have reached their logical conclusion. When he was elected last summer, IBK was commonly perceived as Sanogo’s ally; he had even been described as “the junta’s candidate.” Rather than attack his supposed ally head-on, Mali’s president has been biding his time, incrementally ratcheting up the pressure on the junta.

Why did things come to a head now? Perhaps because Sanogo was refusing to go gently. Many Malians suspect he was even trying to intimidate those who sought to question him. Judge Karambé reportedly feared for his safety, and his home has been under tight security. Just yesterday, the judge’s son was attacked in Bamako by assailants who stole his motorcycle; some interpret this incident as a veiled threat against the judge himself. (The number one rule of political analysis in Mali: there are no coincidences.)

How will this development be greeted in Bamako? From my vantage point in Pennsylvania, it’s hard to say. The first two people I called in Mali’s capital, around 7:30 p.m. Bamako time, weren’t even aware of the news. One friend, an ardent Sanogo admirer, flatly contradicted my report that he had been arrested. If such a thing had happened, my friend told me, he would certainly have heard about it, and there would be angry crowds in the streets. (Could the Malian government somehow be keeping the lid on this story, at least for a few hours? Even if it were, wouldn’t Bamako residents have heard the news via RFI?) But the BBC’s Bamako correspondent thinks most residents are relieved to see this long saga finally approaching its end. And the families of those “disappeared” by the junta are definitely celebrating.

In any case, massive protests against Sanogo’s arrest strike me as unlikely, as the general’s following has significantly diminished over the past year. I do feel confident in predicting that if the Sanogo case ever goes to trial, it will be a momentous and closely watched spectacle. There may even be public pressure on the government to broadcast it live, as was the case with former President Moussa Traoré in the 1990s, when he was tried for political and economic crimes committed while in office. But then, let’s remember, although Moussa was convicted and sentenced to death, he was eventually pardoned and is now enjoying a peaceful retirement in a very nice mansion on the bank of the Niger River in Bamako. Perhaps Mali’s putschist captain-turned-general can expect a similar fate?

Postscript (4 December 2013): Prosecutor Daniel Tessogué confirms the discovery of a mass grave near Kati, containing 21 bodies thought to be those of red berets killed by the junta in May 2012. The existence of this grave has been spoken about in Mali for some time (see my response to a comment below), but never before verified. Meanwhile, pro-Sanogo protestors in Kati have set fire to one of that town’s markets, in their fourth demonstration since Sanogo’s arrest. An interview with Sanogo has also been broadcast by a Bamako radio station; in it Sanogo claims he is the object of a vendetta by red berets and others linked to the deposed regime of Amadou Toumani Touré.

This entry was posted in Uncategorized and tagged amadou sanogo, cnrdre, IBK. Bookmark the permalink.

8 Responses to Sanogo in the clink