Posted on June 3, 2019 by brucewhitehouse

Editor’s note: The role of manyamagan[1] has no equivalent in Western culture. “It is still carried out in several regions of our country,” wrote Aoua Keita in 1975; “it is exclusively female, very often passed down from mother to daughter and consists of helping young people in the first days or even months of their marriage.”

In 2010 I met an elderly manyamagan in Bamako. In the following excerpt of the interview she accorded me, one can sense frustrations about culture loss and transformation similar to those in my interview with a griot. One can also learn a lot about gender roles and how young Malian women entering marriage might learn the rules of femininity and appropriate wifely behavior. I’m not sure whether the manyamagan is disappearing in Bamako these days–or whether its disappearance would be something to mourn.

Being a manyamagan is all about educating the bride to give her to her husband. First for three days [prior to the wedding ceremony], and then for seven, altogether ten days.

A young woman who’s getting married knows nothing about how to treat her husband, how to treat her in-laws, how to look after children. [As manyamagan], if you see that she disrespected her husband somehow, you tell her to stop it. If you see that she spoke harshly to her husband, you tell her to stop it. You tell her that her husband is her family, that she must love him. “Your husband is a relation, you must love him. Your husband’s friends, you must never come between them. If your husband needs water for washing, you draw the water. If your husband comes with food, you cook it. If he says not to go out, you stay put. If he says not to go someplace, that he doesn’t like it, you stop.” Being a manyamagan is about those sorts of things. 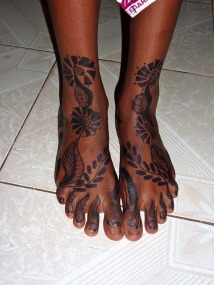 Henna on the feet of a new bride

Some people don’t want a manyamagan, they say they don’t need her; they’re afraid of the expense, because if you have a manyamagan you need to support her. If there’s a young girl with you, you need to support her. So they can say they don’t need her. With some, [the nuptial chamber] lasts three days. With others it’s seven days. Whatever your means can support, that’s what you do. Back home in the Segou region, it used to be a week but now they’ve dropped that to three days to reduce the expense.

Suppose a wedding happens on a Sunday. So [from then] through Thursday, Friday, Saturday, or Sunday, [the bride] doesn’t go anywhere; you bring her good food to eat. She doesn’t eat to [millet or cornmeal porridge], couscous, rice, or bread. Because if she eats them, lying in one place, they won’t digest, they’ll make her tired.[2] So when she’s done there, she’ll turn out well, she’ll be a good wife, she’ll become radiant. The manyamagan sits to watch over her and checks the food she eats. Because people may come with food to give her and the food’s not good. You can tell her not to eat it.

Some [couples] don’t even provide you a place to sleep. Others, when you go they respect you; some pay you your money, others don’t. Some treat you well, it’s like you’re in your own home. But with others you have to spend your own money. There are good and bad. It’s like when you start a job, you find peace and rest. But sometimes you don’t find rest. But if it’s your work it doesn’t bother you. You’re seeking a reputation: if you do it well, people will speak highly of you, they’ll respect you. [Being a manyamagan] used to have benefits, but these days the benefits are few; people don’t have much. Before, people would give you a lot of millet, and sugar, and money. These days you might just get a tiny bit of millet, because they don’t have enough.

Nowadays the man and the woman decide to marry each other. A man says “I like this one,” but he doesn’t know her father’s behavior or her mother’s behavior, he doesn’t know her own behavior. He just likes her because she is good-looking, and says “I’ll marry her.” If they get along, fine. If they don’t get along, she doesn’t need his father, his mother or him, and she walks out. That’s changed. It used to be that you and your husband would not lay eyes on one another until the konyo [nuptial celebration]….[3] If they get along, things work out. If they don’t get along, the father has nothing to say, the mother has nothing to say, [the bride] walks out on her two feet. That’s changed. Before, weddings didn’t cost a lot of money. Now a wedding is expensive, it has no barika [strength, vigor].

When a young bride marries, at that time she doesn’t have a lot of ideas, she fears her parents, she accepts whatever they tell her. But if she gets a lot of ideas, she’s 20 or 30 years old… maybe she’ll accept what her parents say because she’s understood a lot of things. If she’s a good wife it will work out, and if she doesn’t become a good wife, it gets ruined. Brides should marry early, that’s good. If a woman marries young, that’s good. My own children married at age 14, I myself was 13. All my children married early. But nowadays there aren’t husbands, it’s hard to find them. Even if you want to marry, if you can’t find a husband how can you marry? The lack of men is a problem![5]

I’ve advised a lot of brides, and none of them has divorced. Their marriage doesn’t die as long as their husband doesn’t die. But what God has cut, no one can reattach. All things are in God’s hands.

This entry was posted in Uncategorized and tagged bamako, culture, gender, marriage. Bookmark the permalink.