Posted on December 13, 2011 by brucewhitehouse 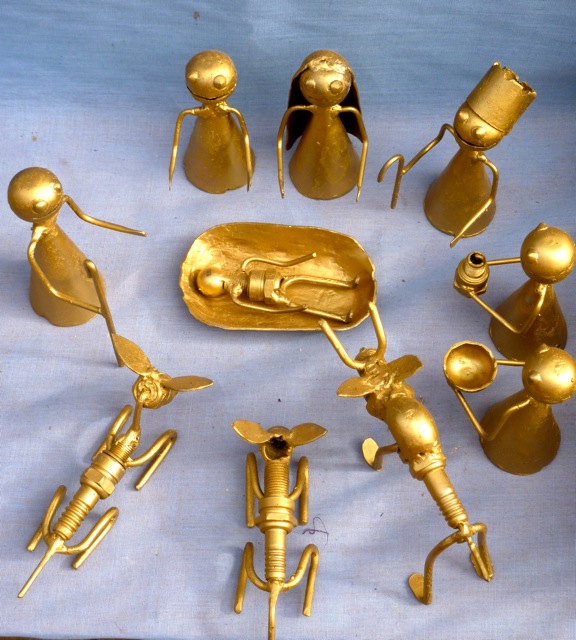 For English speakers, the French verb “récupérer” is one of those false friends: it doesn’t exactly mean “to recuperate,” though many of their meanings overlap. A better translation would be “to recover,” as in to get something back that was lost; “to salvage” comes pretty close too.

Visitors to almost any West African crafts market nowadays are likely to find, alongside the wooden masks, leather goods and indigo cloth, ingenious objects made essentially from “found objects” or junk — aluminum cans, old auto parts, wires from broken radios, et cetera. The French term for this category of objects is “l’art récupération.” Most often, these works are miniature versions of some of the same machines from which their components were salvaged: automobiles, motorcycles, and bicycles are among the most common on display.

Miniature auto made from hairspray cans

You might be tempted to think of these objects as toys rather than art, and in fact they come out of a long tradition among African children of making playthings out of junk (e.g. here or here). The difference here, however, is that these objects are made by grown-ups, and they don’t function especially well as toys. (They break quite easily, as my son Zachary will tell you.) And the people who make them are calling themselves “artistes récupérateurs“.

These days I’m seeing more and more salvage-art objects representing not machines, but animals or people. A whole category now exists of figures made with spark plug torsos (see the crèche above, and the angel below). 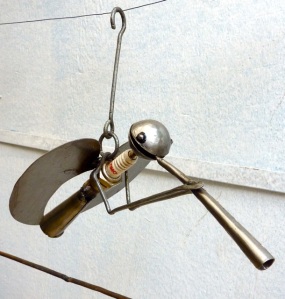 What is it about salvage art that appeals to Westerners like me? Personally, I find it more germane to the lives of most Africans in the 21st century, especially those who live in cities like Bamako, where things like soda cans and spark plugs are much more common and relevant than mudcloth or carved funeral masks. 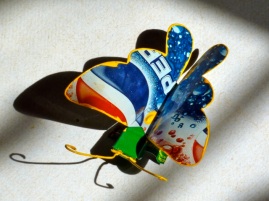 I also like the fact that these objects are literally salvaged from scrapyards and garbage heaps — not for this practice’s “green” effects, which are surely negligible, but for the way it embodies a creative response to privation. In Africa the credo “reduce, reuse, recycle” is motivated by economic necessity rather than ecological concern. In Bamako we don’t separate our recyclables from our garbage: others do that for us, taking the bottles, cans and cardboard right out of our trash can for resale or reuse.

For this reason, I believe, l’art récupération also carries a political message. (Here I’m inspired by the writings of anthropologists like James Ferguson and Charles Piot.) When a miniature car is made by someone who cannot afford to drive a car, or a miniature airplane by someone who cannot buy a plane ticket, these works of salvage art serve as reminders of the tremendous inequality that prevails at the global level. They represent a claim to inclusion in the modern world by those who lack the means to live out their material aspirations. Here’s what this art says to me: They want the same future we want, but at least for the time being, they can only salvage it out of junk.

This entry was posted in Uncategorized. Bookmark the permalink.