Too many women in this town?

Posted on January 29, 2012 by brucewhitehouse 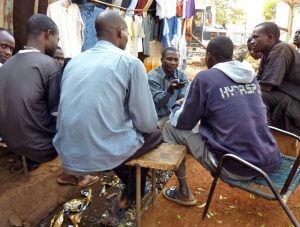 A key part of my current Bamako research is discussions with groups of 8 to 10 city residents, in which my research assistants and I ask questions pertaining to family and marriage. We organize each of these focus groups to be relatively homogeneous in certain respects (namely gender, marital status, and level of education), then balance this homogeneity through inter-group variation. For every discussion with unmarried, less-educated young women, for instance, we’ll have another with unmarried, less-educated young men, another with unmarried, more-educated young women, another with married, less-educated women, etc. We meet each group on their “turf” so to speak, ask each group the same questions, and the discussions last from 90 minutes to two hours. Focus groups aren’t very useful for learning about individuals’ experiences or beliefs — people don’t share many personal details in them — but they’re great for identifying normative views and showing how these views vary (or don’t) across demographics.

One question we ask is, “Do you think there are as many women as men in Bamako? Why or why not?” The responses generated are surprisingly uniform: young or old, male or female, non-literate or university-trained, Bamakois are very likely to say that more women than men live in their city. The issue here is not whether women outnumber men, but by how much. Some say the ratio is 60/40 in favor of women, others say 70/30, some even suggest 80/20 or 90/10. 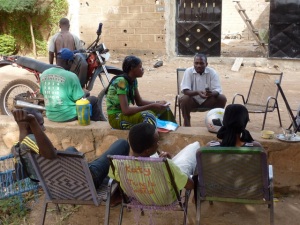 Whatever the ratio, the existence of a surplus female population is among the most commonsense, taken-for-granted ideas in Bamako, and in Mali as a whole. It’s just something that everyone knows. Many of our focus group participants point to anecdotal evidence from their daily lives: “Look at the passengers on the SOTRAMAs [minibuses] every day,” one woman said, “they’re mostly women.” Other participants refer to social scientific data, citing surveys or statistics they’ve heard of to back up the notion of female overpopulation and the corresponding notion that there aren’t enough men to go round.

There’s just one problem: it’s not true. Yes, as in most countries, the sex ratio in Mali (according to the country’s most recent Demographic and Health Survey) skews slightly toward females, who make up 50.5% of the nation’s population. But the ratio skews in the opposite direction for Bamako, where 50.2% of residents are males. Due to the large number of males who become rural-to-urban migrants, urban sex ratios in Africa tend to favor men, if only by a little, and Bamako is no exception.

The fact that females have a slight edge in national census figures must have something to do with the widespread perception of an excess of females in Bamako. But this is more than a simple misapprehension of available data. There’s a reason people here need to see too many women when they look around. And that reason is polygamy.

[Anthropological sidebar: Technically, I’m talking about polygyny, the form of polygamy where one male marries two or more females. But since the alternative form, polyandry, is basically unknown in Africa, I follow the example of my Malian hosts in using the blanket term “polygamy” to describe this practice.]

West Africa is home to the highest polygamy rates in the world. Roughly 40% of married women in Mali are in polygamous unions (this figure is 24% for Bamako); rates are even higher in neighboring Burkina Faso and Guinea. Such levels of polygamy are not found outside West Africa, even in other majority-Muslim countries. The polygamy rate in Mauritania, Mali’s predominantly Arab neighbor to the northwest, is about 12%, while in Yemen and Pakistan it’s only 7%. (I haven’t yet come across polygamy statistics for Saudi Arabia or several other countries of the Muslim world; the latest Demographic and Health Surveys for Egypt and Indonesia, incidentally, don’t even mention polygamy. But rates in these countries are likely to be closer to those in Pakistan or Yemen than those in Mali or Niger.) As the chart I’ve put together below indicates, Islam is not the only relevant factor here; being in a West African society correlates much more strongly with polygamous marriage than being in a Muslim society does. 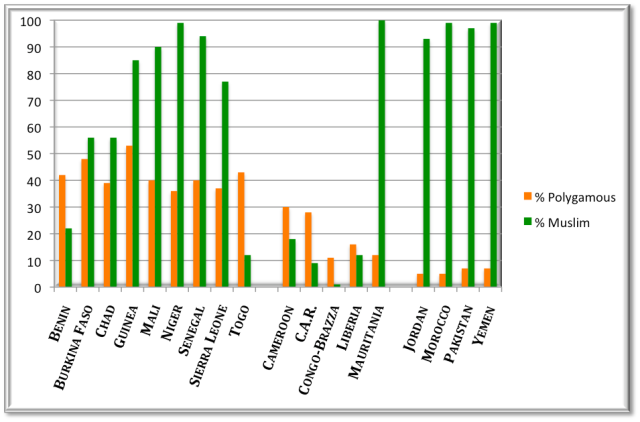 [A note on the chart: Countries in the left cluster, all of them West African, have polygamy rates of 35% or more; those in the middle cluster, in West and Central Africa, have rates of 10-30%; those in the right cluster, in North Africa and Asia, are between 5 and 10%.]

One might therefore conclude that polygamy is popular in Mali, and indeed it is. Yet our focus group data also reveal that people here see polygamy as a problematic institution, the cause of considerable domestic strife and intra-family conflicts. The Bamanan-language term for “rivalry,” fadenya, literally means “father-child-ness,” expressing the competition that prevails among children of the same father but different mothers; by contrast badenya, “mother-child-ness,” the condition of being full siblings, denotes solidarity. When we ask focus group participants to name the disadvantages of polygamy, men and women alike rattle off several: jealousy among co-wives, rivalry among half-siblings, problems between a polygamous husband and his wives, squabbles over inheritance, high economic costs… the list goes on and on.

When we ask what the advantages of polygamy are, people are slower to respond. They are most likely to say that without polygamy, many women would never find a husband — since “everyone knows” that women far outnumber men in this part of the world. Polygamy, in this view, is an institutional adaptation to Mali’s supposed female overpopulation problem. 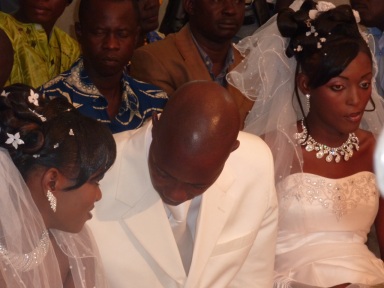 A husband for every bride? Bamako wedding ceremony, July 2010.

Furu ye wajibi ye, goes a Bamanan saying: Marriage is an obligation. While it holds for both sexes, the obligation is much stronger and begins much sooner for women. Young Bamakoises want to get married by age 25, after which point they’re seen as having passed their “sell-by” date. They worry that if they don’t find a husband by their mid-20s, they never will. (Bamako’s males, on the other hand, can wait until their 30s or even 40s, and indeed the average age at first marriage is about 9 years older for males than females here.)

The fact that essentially all men and women in Mali do marry — demographic surveys show no significant numbers of “old maids” or “confirmed bachelors” in the Malian population — does nothing to diminish many young women’s fears of being unable to marry. The myth of female overpopulation makes young women all the more anxious to find a husband, and all the more willing to settle for a polygamous one, while it also provides husbands a useful, even humanitarian justification for marrying multiple wives.

This is one of those myths that members of certain groups need to believe, and hence continue to believe in the absence of valid evidence. They simply fabricate evidence to fit the myth. (An example from my own society might be the myth of Barack Obama’s Kenyan birth, which no rational argument can persuade “birthers” to abandon.) Polygamy has been a part of Mali’s social fabric for so long, I don’t think most Malians can imagine their society without it — even those who would never consider polygamy themselves. As troublesome as polygamous unions may be, it’s easier for Malians to rationalize them through the myth of female overpopulation than to do away with them. And for this reason, I don’t expect to disabuse anyone here of this myth anytime soon.

[Postscript: Despite appearances, the wedding ceremony photo above does NOT show a wedding between one groom and two brides. I took it at a civil ceremony in July 2010, at the height of Mali’s pre-Ramadan wedding rush, where several couples were getting married simultaneously. The bride at right has no relationship with the groom in the middle!]

This entry was posted in Uncategorized and tagged bamako, gender, mali, marriage, polygamy. Bookmark the permalink.

8 Responses to Too many women in this town?