Kidal, as seen from Bamako

There are, of course, radically different narratives about what happened in the northern town of Kidal last weekend. One of them, which we’ll call the “loyalist narrative,” says that Moussa Mara, Mali’s dynamic and courageous prime minister, flew to Kidal on a peacemaking mission and visited the governor’s office, which was then attacked by terrorists (including MNLA separatists) intent on scuttling negotiations. The attackers shot many Malian soldiers dead and took 30 civilians hostage, coldly executing several. An opposing account, which we’ll call the “separatist narrative,” claims that Moussa Mara, Mali’s reckless, inexperienced prime minister, engaged in a deliberate act of aggression by flying to Kidal, intent on scuttling negotiations. Without provocation, Malian troops assaulted the MNLA barracks in town; MNLA members then fought back, taking 30 prisoners of war, some of whom were killed in the crossfire. (Read the MNLA’s May 19 communiqué for a full version of this narrative.)

The international community has so far responded cautiously. The US State Department condemned the violence without identifying the perpetrators; Bert Koenders, the UN’s special representative to Mali, did the same and called for an investigation. But in statements to the press, Prime Minister Mara linked the rebels to Boko Haram, and said that “Mali is at war with terrorists.”

The events in Kidal have stirred up nationalist fervor in Bamako, where the media and ordinary people generally make no distinction between the MNLA separatists, jihadis,  armed bandits and drug smugglers. They hold bitter memories of the massacre at Aguel Hoc back in January 2012, when dozens of Malian soldiers were killed. A headline in today’s issue of L’Indépendant, normally one of the more temperate voices in the Bamako press, screams: “The MNLA and its narcojihadist allies commit pure butchery in Kidal as in Aguel Hoc in 2012: Six hostages tortured before being slaughtered, eviscerated or shot by their kidnappers.” The article identifies the victims as four government officials and two soldiers. (An article in Les Echos lists all six as government officials.) The Malian nation has a new set of martyrs.

There is extremely little public support in Bamako for letting Kidal, or any other part of Mali, be split off from the rest of the country. Results from Afrobarometer’s December 2013 survey show that support for a united country was at 95 percent in Bamako (the nation-wide average was 92 percent). It’s true that Kidal is a remote region with a tiny population, and it’s unlikely that most people in Bamako have ever actually set foot there. Yet for many Bamakois, Kidal serves as an important symbol of the nation and its territorial integrity. Alioune Ifra Ndiaye, a pillar of the Bamako arts scene, recently began a campaign on social media to promote national unity and patriotism under the slogan “Je suis Kidalois.” 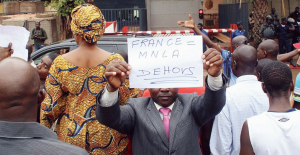 In Bamako as well as Gao, protestors have denounced what they perceive as French and UN complicity with the rebels. A growing number of Malians have come to believe that the MNLA is part of an international plot to divide the country. France is generally seen as the force behind this plot. (Even some prominent jihadi leaders have described the MNLA as a puppet of the French.) And it is certainly true that the French government has had a rather cozy relationship with the MNLA since its inception; its current ambassador in Bamako has had close ties to the breakaway movement.

From the protestors’ point of view, the separatists have no political legitimacy and no legitimate grievances; they merely defend their own shadowy interests and those of their sponsors abroad. To advocate negotiations between the Malian government and the MNLA — as every foreign government and international organization has done, and as stipulated by last June’s Ouagadougou Accord — is, according to this perspective, an insult to the Malian people. As far as the protestors are concerned, you could no more expect the Malian government to hold talks with the MNLA than you could expect the US government to hold talks with Al Qaeda.

Yet President Ibrahim Boubacar Keita, even after his prime minister has spoken of all-out war and called the MNLA terrorists, even after the president himself accused rebels in Kidal of crimes against humanity and vowed to punish these crimes, even after he dispatched 1500 Malian troops to Kidal, continues to talk about a negotiated settlement. In a televised address to the nation on Monday evening (the text of which was printed in Tuesday’s L’Indicateur du Renouveau), he said, “We will therefore go toward dialog, convinced as we are that salvation imperatively passes that way. Salvation as long, of course, as all parties, the government of Mali, the international community, the armed movements, live up to their engagements.”

For the past 15 months, Kidal has been under the control of a small band of armed rebels, a situation tolerated by the international community. Under the influence of the loyalist narrative, most of Keita’s countrymen see these rebels as unrepentant criminals who must be brought back into the national fold, by force if necessary. The violence that followed the prime minister’s Kidal visit offered an opportunity to do exactly that. The questions to ask now are: Will Keita exploit that opportunity (while still preaching peace), or is he serious about his commitment to a negotiated settlement? And, perhaps more importantly: Is there anything left to negotiate?

For people in Bamako, the answers are difficult to see.

[Author’s note: This post is meant to explain the common views of Bamako residents on matters of national unity and negotiations with armed groups. I do not necessarily endorse these views, nor do I believe that a purely or primarily military solution can achieve lasting stability in northern Mali.]

Press roundup: A number of headlines in the global English-language media suggest that last weekend’s conflict has dealt a blow to the MNLA’s image, associating it with hostage-taking groups like Boko Haram and presenting the group as the aggressor:

Meanwhile, the Malian government seems to be pressing its advantage with international opinion, demanding that the UN assume a more robust mandate to disarm rebels. According to the AP, Mali’s foreign minister Abdoulaye Diop urged the UN Security Council via videoconference to take action; at one point Diop “held up a picture of a woman — a regional government official slain by the rebels — and said: ‘This is a crime against humanity and your council should take strong action in order to stop impunity and atrocity.'”

Managing international opinion was never a strong suit of the Malian government, particularly where the conflict in the north is concerned. Under Mara’s leadership, that may be starting to change.

Postscript, 22 May: In the wake of the rebel victory over the Malian army in Kidal on 21 May, the conspiracy theme continues to run hot in the Bamako press and among Malian social media users. A headline in today’s Le Pretoire casts Mali as the “victim of an international plot”; on Facebook you can read wild allegations that French troops parachuted into Kidal to fight alongside the MNLA. Small anti-France demonstrations have continued in Bamako, where the French lycée was closed today as a safety precaution. French Minister of Defense Jean-Yves Le Drian has reportedly canceled a scheduled visit to Bamako. The city’s markets have been unusually quiet as many residents went home early or even stayed home.

This entry was posted in Uncategorized and tagged IBK, war. Bookmark the permalink.

6 Responses to Kidal, as seen from Bamako