Mali vs. the West

Is Mali the victim of a shadowy global conspiracy?

Malians are pondering this question more and more, and for many of them the answer is a clear “yes.” Surveying the chaos engulfing their country and region, they see the hidden hand of the world’s great powers.

Such analysis is common, and increasingly explicit, in the Bamako press since last month’s crushing ejection of the Malian military from Kidal by separatist rebels. Consider an article from the 16 June issue of Inter de Bamako (headline: “Crisis in the north: The national and international plot against Mali is confirmed”). Author Yacouba Aliou portrays the MNLA rebellion as a French creation, and claims that “everything that happens in Kidal is an initiative of France.” But the plot also includes the Americans, the Swiss, the Scandinavians, and Mali’s neighbors Burkina Faso and Mauritania, whom he accuses of harboring the MNLA. The conspiracy extends further to all African heads of state, who “take no initiative except those coming from France and the USA.”

To those who perceive this plot, the fact that all these governments have been insisting that the Malian government reach a settlement with the MNLA is proof the plot exists. This insistence is, to put it mildly, a sore point for many in Bamako. “It would be more practical for the Malian government to talk with the HCUA [successor to the Tuareg-dominated Islamist group Ansar Dine] or MUJAO, labeled jihadists, than to talk with the thieves of the MNLA,” Aliou writes. If Western and African governments expect Bamako to make concessions to the MNLA, he supposes, it must be because they actively side with the rebels. He exhorts his compatriots to understand that “Mali is at war with France and its friends in Europe and the West.”

The reason for this war is power, pure and simple. After UN Secretary-General Ban Ki-Moon recently urged all parties to Mali’s northern conflict to implement a ceasefire agreement, Yoro Sow, also writing in Inter de Bamako, angrily characterized the United Nations as “imposing the diktats of the winners of the Second World War, whose only desire is the domination of the world by iron, fire and blood.” The plot widens.

And the alleged Western conspiracy to divide and conquer Mali is not the exclusive preoccupation of opinion writers at a bottom-tier Bamako newspaper. The plot has also been condemned by Malian “civil society” groups, such as the Conféderation syndicale des travailleurs du Mali, a labor organization. In a statement released in February, the CSTM’s leadership denounced the “underhanded complicities of a fringe of the international community as malevolent as it is selfish, whose unacknowledged aim is the partition of Mali.”

Rokia Sanogo and Oumar Mariko at MP22 rally in Bamako

Especially where the French are concerned, apprehensions of sinister designs are common among Bamakois, notwithstanding their enthusiastic welcome for French troops just 18 months ago. “France’s arrival in Mali is not in our interest,” declared Rokia Sanogo of the MP22 political movement earlier this year. “The MNLA is a creation of France, a mole. And France advanced the jihadist presence to be able to come here while supporting the MNLA.” Seydou Badian Kouyaté, who served in President Modibo Keita’s cabinet in the 1960s (and later advised Congolese strongman Denis Sassou Nguesso), similarly sees the MNLA as a puppet of French interests, and has accused France of waging a 50-year campaign of “raising the Tuareg against us.”

Such claims are not new to Mali (see my 2012 post about “false flag” theories and my 2013 post on “intoxication by information”), and one should not overstate their significance in Malian society today. Unlike in, say, Zimbabwe, allegations of neocolonialist plots have been absent from official government discourse. The state newspaper L’Essor, in fact, has tried to quell these rumors, declaring that “always trying to stigmatize [France and the UN] stems from a denial of reality.” Nonetheless, the recent surge in allegations of a French or Western plot to destroy the country demands serious analysis.

There is a self-serving element to these conspiracy theories, particularly concerning the Malian government’s stance toward Tuareg separatism. If the MNLA and other rebel groups were hatched by foreign powers, they cannot also express legitimate political grievances of the country’s northern residents. By painting the movement as externally generated, its critics can absolve themselves and their state of responsibility for the present conflict. They need not account for years of inept, corrupt and occasionally brutal central government rule, because France makes a handy scapegoat.

But there is a more substantive element too, because like all conspiracy theories (see Peter Tinti’s “On Conspiracy Theories and Uncomfortable Truths“), the “MNLA as French puppet” narrative is based on nuggets of fact. Le Nouvel Observateur reports that Tuareg rebels have received covert assistance for years from the DGSE (France’s foreign spy agency), which believed they could track down jihadists holding French hostages in the Sahara. (In the US, Rudy Atallah has also advocated using Tuareg fighters as a “force multiplier against the Islamists.”) As recently as mid-2012, according to a report published in Le Monde, the French government airlifted arms and fuel to the MNLA.

And Malians harbor nagging doubts about the role of the “international community” in their nation’s conflict and its resolution. If France and its allies truly support Malian national unity, why were MNLA troops never bound by the “cantonment” process in Kidal under the terms of last year’s Ouagadougou Accord (an accord that was itself denounced by a Malian presidential candidate as “the greatest plot against Mali’s territorial integrity”)? If the US government truly stands with the Malian people, why didn’t it intervene to help beat back the rebel threat in 2012? (Forget about the Leahy Law–nobody I’ve met in Mali believes US foreign policy can be constrained by something as puny as law.)

Beyond their self-serving and substantive aspects, however, what I find most troubling about Malian conspiracy theories is the shared assumption upon which they’re based: that the policies of Western governments are designed to maintain Western dominance by destabilizing the rest of the world.

Boko Haram: Made in USA?

Western powers, under this assumption, see peace and prosperity in the Third World as a menace to their own welfare. Because their wealth is based on the subjugation of impoverished nations, they strive to keep places like Mali poor and conflict-ridden. Mohamed Diakité, in his column in the Bamako weekly Tjikan, suggested earlier this month that Boko Haram, the virulently anti-Western terrorist group that has kidnapped and slaughtered thousands in Nigeria, is actually a creation of the CIA. His rationale? Because Nigeria recently surpassed South Africa as home to Africa’s largest economy. “The hidden stakes behind all this are simply economic,” Diakité writes. “It’s a matter of slowing Nigeria’s rise to power as a West African regional power and countering the breakthrough of certain emerging Asian and Latin American countries in Africa, notably China and Brazil.”

What I disagree with here, even more than the baseless accusation of US support for Boko Haram, is its underlying worldview of global politics as a “great game” (and a zero-sum game at that) in which the stability of the global South is inimical to the interests of the global North. This rationale is a fixture among francophone African analysts of the geographic and demographic foundations of international relations, commonly called la géopolitique. 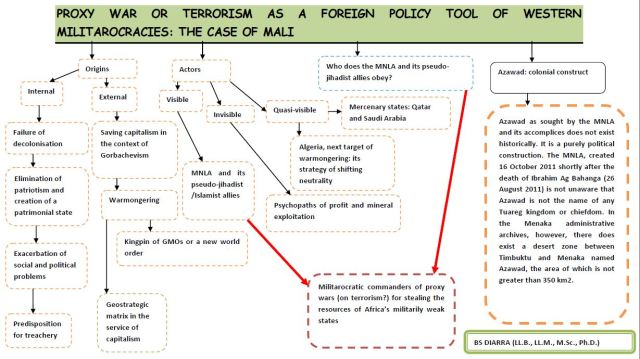 It’s not easy for me to evaluate geopolitics and its assumptions, in part because my training is in anthropology rather than political science or international relations. I’ve read political economy and dependency theory, but I’m skeptical of a Western imperative to destabilize the Third World for three reasons. One, it flies in the face of my own experiences in Africa, where I have known representatives of Western governments and international organizations to be genuinely committed to promoting peace and economic security–even though they fail in this mission far too frequently. Two, the idea that the West seeks to profit from chaos in the South ignores the fact that peace is generally good for business and foreign investment, while war is not. Overall, instability in Mali, Nigeria or Syria does not make Americans, Canadians or Norwegians better off. And three, this model of politics reduces Africans to passive victims in a global historical narrative, ignoring the dynamic processes of “extraversion” (see Jean-François Bayart) and “political ju-jitsu” (see Gene Sharp or Stephen Ellis) in which Africans and their leaders have long been engaged.

The American university students I teach perceive the US as a primarily benevolent force in the world. They see Africa’s poverty and conflicts as the result of the continent’s insufficient modernization. I have to show them that the history of US and Western engagement with Africa goes a long way to explaining African problems today. But where I attribute the cause to our collective (and often self-serving) blindness to our policies’ consequences, my Malian friends are much more likely to attribute it to a deliberate strategy of Western hegemony. Mali’s conspiracy theories are not invented by unread peasants; they are elaborated and swapped by the most educated members of society, some of them with Western graduate degrees. Their beliefs stem not from ignorance of the facts, but from a distinctive interpretation of them.

While I don’t accept this interpretation, reading recent accounts of Mali’s “war with the West” makes me question my own analysis of global politics as seeking, if not greater justice, then at least enhanced cooperation and stability. Is this view misplaced? Has our world not changed since Niccolo Machiavelli’s time? I hope someone with poli sci or IR credentials will enlighten me.

Postscript, 10 July: The Bamako daily L’Indépendant claims it has received a confidential document, “concocted” by unnamed “partners involved in the resolution of the crisis,” which lays out Mali’s future partition–but it neither shows the document nor provides details on which countries produced the document.

Postscript, 10 September: The New York Times has published an article on Iranian views that the Obama administration set up the radical jihadist group ISIS as a means to divide and conquer the Middle East.

Postscript, 5 November: A leftist alternative news site is running an interview in which someone named Francis Boyle describes the Ebola virus currently ravaging West Africa as a possibly weaponized strain released by US biological warfare laboratories; he adds that US military efforts to contain the outbreak in the region are merely a smokescreen for an invasion. This interview is now discussed in francophone Africa via its translation on the Canadian altermondialiste site mondialisation.ca.

This entry was posted in Uncategorized and tagged France, rebellion, Tuareg. Bookmark the permalink.

32 Responses to Mali vs. the West