Kicking the foreigners out

Posted on August 25, 2016 by brucewhitehouse 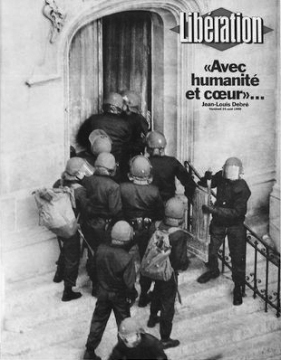 Amid the recent hype over Donald Trump’s xenophobic rhetoric in the US, the anniversary of a landmark crackdown on unwanted foreigners has quietly slipped past. 20 years ago this week, police broke down the doors of the Eglise Saint-Bernard in Paris and “evacuated” the 210 undocumented migrants within, mostly West Africans. The brusque removal of these men and women from their supposed place of sanctuary mobilized political opposition to President Chirac’s conservative immigration policies and helped bring a leftist government to power in France the following year.

While the Saint-Bernard operation was dramatic and highly mediatized, it was by no means unusual in the experience of Malians who go abroad. In August 1996, the very same month France expelled dozens of Malians, with little fanfare the Angolan government began a massive roundup (dubbed “Operation Cancer II”) of foreign migrants on its territory. On 22 August, the eve of the Saint-Bernard raid, Angolan police surrounded a mosque in one Luanda neighborhood and detained everyone inside–again, mostly West Africans. The campaign lasted four months and led to the deportation of 4000 migrants, including 1000 from Mali. “Cancer II” and many similar mass expulsions of immigrants by African governments have scarcely garnered any attention internationally. Over the years Malians have been targeted by sweeps in countries including Burundi, Congo-Brazzaville, Congo-Kinshasa, Equatorial Guinea, Gabon, Libya, Mozambique, South Africa, and Zambia. (One passage in my book Migrants and Strangers in an African City details the expulsion of thousands of West Africans from Congo-Brazzaville.) Most recently, dozens of would-be asylum seekers from African countries were deported by the US government, while Algeria repatriated over 400 Malians allegedly bound for Europe.

International migration is important to Mali. It’s difficult to know how many Malians live outside their country’s borders; most Malians who move from one place to another remain within Mali (the 2009 census found 2.6 million of these “internal migrants” in the country, some 20% of the total population). Reckoning the number abroad is much harder. For years the Malian Ministry of Malians Abroad has estimated that four million Malians live outside the country, a figure that seems wildly inflated even if we expand the category of “Malians abroad” to include anyone having one or more Malian parents. The Malian government’s RAVEC administrative census identified 265,000 Malian voters living abroad, while the World Bank estimated over 360,000 Malian emigrants in 2015. Arouna Sougane’s chapter in Le Mali Contemporain (2014) entitled “Migrations et transferts : Un état des lieux” advances the figure of 328,000 migrants, or 2% of Mali’s total population, abroad; some two-thirds of them live in other African countries, while 17% (57,000 by Sougane’s reckoning) live in France.

Even if international migrants account for a tiny sliver of Mali’s overall population, they are vital to the country’s economy. The World Bank estimated that Mali received 200 billion CFA francs in remittances from these migrants in 2011, while the regional central bank put the figure at over 350 billion, worth more than US$750 million at the time. And these figures, which have climbed steeply over the past few years (see below), don’t even factor in funds sent through informal value transfer systems, widely used by the Malian diaspora. At least one out of five people in Mali resides in a household with one or more migrants abroad, and in those households remittances account for 11% of household spending. (The above statistics all come from the same chapter by Sougane.)

Remittances to Mali (source: knoema.com, based on World Bank data)

All told, it’s quite possible that Mali’s remittances exceed the level of official development assistance (“foreign aid”) Mali receives, once informal flows are factored in. And, unlike official aid, remittances tend not to get siphoned off by foreign consultants, administration overhead and elites in Bamako; they go straight to urgent household expenses and sometimes to community-level projects (schools, clinics, mosques etc.).

So you can see why Malians would be concerned about rising anti-immigrant sentiment in host countries. Civil society groups like the Association Malienne des Expulsées have been sounding the alarm for years, and the fact that Mali could wind up on a list of “excluded countries” under a Trump administration is surely not lost on them.

The study of African migration flows and the barriers they’ve faced offers lessons that we in the West might ponder as we consider how to respond to the perceived “threat” of migrant influxes in our own countries.

From their own experiences or those of their kin abroad, Malians often recognize that discourse casting immigrants as the enemy is purely a political tool–what we might call a form of ethnocentric nationalism. As Yael Tamir writes, “Ethnocentric nationalist language hardens the heart and leads individuals to be impervious to others’ misery, destruction and expulsion, blind to injustice, hatred and death. Ultimately, when national struggles occur, only a few members of each nation participate or support hostile activities, but many more are guilty of crimes of omission.” These words are worth remembering as we think about how to respond to the foreigners in our midst.

Postscript,  24 September: On the US case, consider this op-ed from the Washington Post: “Mass deportation isn’t just impractical. It’s very, very dangerous.” This article concludes, “history has shown that crisis rhetoric, coupled with a racially tinged aspiration to mass deportations, has repeatedly led to episodes that harm some severely, perhaps even mortally, and is likely to bring shame on us all.”

This entry was posted in Uncategorized and tagged France, migration. Bookmark the permalink.

13 Responses to Kicking the foreigners out